Determinant
Urban Champ is the boss of the stage Urban Chabobo.

Urban Champ is the first playable character of the fighting NES game, Urban Champion. He fights with an another man in a neighborhood. His goal is to win as many fights as possible by knocking the opposing fighter into a manhole.

After Big Daddy's death, Abobo enters a pipe, later tries to exit through the pipe, but he couldn't and he breaks the pipe. Later, he encounters Urban Champ and they fought.

Urban Champ is the easiest opponent in the game, because he can't punch Abobo.

After, Abobo defeats him, and a "FINISH HIM!" screen appears. Abobo can kill or spare him, so he can fatality or friendship.

Abobo can kill Urban Champ, destroy his head with a strong punch. 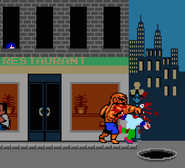