Good
Toad is a minor character in Abobo's Big Adventure.

Toad (also known as Mushroom Retainer) made his debut in Super Mario Bros. for the NES. Over seven Toads appear in every castle, with the exception of the eighth one. After Mario defeats a false version of Bowser, he finds Toad. He tells him "Thank you Mario, but our princess is in another castle", since Princess Toadstool is trapped in the final castle of the game. Toad is also one of the four playable characters in Super Mario Bros. 2.

A blue Toad can be seen in the "Private Party" Easter Egg (along with Raccoon Mario, Raccoon Luigi and Princess Toadstool) tortured by a Private Party Girl in the game's first level "Double Drabobo."

A red Toad appears in an underground segment in the Zeldabobo dungeon. His only lines are "Sorry Abobo but our Princess is in another dungeon." Abobo can kill Toad if he launches a Bullet Bill at him. His blood will then splatter on the wall.

Toad seen in the Private Party 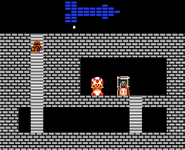 Toad seen in this dungeon, next to a Bullet Bill Blaster 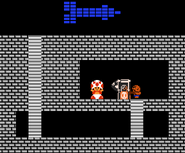 Abobo starts to launch a Bullet Bill from a Bill Blaster next to Toad.

Sprite of Toad when he is hit by the Bullet Bill