Big Daddy
Tetris Blocks are enemies that appear in the stage Super Mabobo and minor characters in Abobo's Big Adventure.

They are the blocks that appear in the NES game, Tetris.

Two green variations of the Tetris Block are fallen to the sea by Big Daddy's "LAZOR!"s. Abobo will take damage if he touches them. They can't be eaten and defeated.

A blue Tetris Block is seen falling out Kirby's vomiting mouth in Contrabobo, and the only blue/non-green Tetris Block seen in the game.

One of the several NES games that Little Mac's head flies through is "Tetris" and it hits a green Tetris block falling down in the area as the block flies off lands on the some blocks. Other green Tetris Blocks are seen. 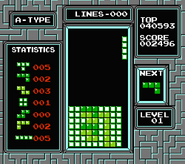