Contrabobo
Stinger (also technically known as TwinBee) is a aircraft enemy that resembles a blue rocket with arms that only appears in the Waterfall section of Contrabobo.

Stinger originates from the 1986 NES game of the same name, known in Japan as Moero Twinbee.

A single Stinger appears once near the end of the Waterfall section of Contrabobo, along with Zombies and a Pterodrop. Stinger fires circles at Abobo, and is moving back and fourth onscreen. But Stinger can be defeated, and its dying animation shows the aircraft floating in the air upwards with a halo around him. 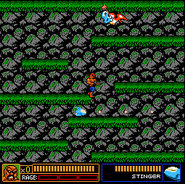