Spiranha is a hybrid between a green Piranha Plant from Super Mario Bros. 3 and the Springer enemy from Mega Man 2. The enemy has the same behavior of its original counterpart.

A least four Spiranha's appear in the level and the first one to be encountered in the level. The piranha moves, and has a head where it can attack Abobo with its Springer body, and it can defeated in two hits. The head of the plant is colored green. 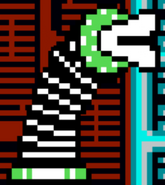 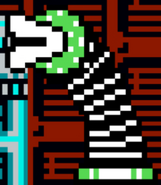