Contrabobo
RoboCop is a robotic mid-boss that appeared in the Contrabobo level.

RoboCop is a robotic police officer, who is the main protagonist and playable character of the three NES game adaptions of RoboCop.

RoboCop appears as mid-boss at one point. He fires 4-3 bullets from his gun at Abobo at a time, which Abobo can dodge. It takes many hits to kill the md-boss. If you kill RoboCop you can get the "Robopopped" medal. 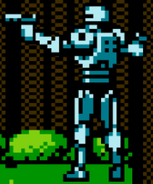