Good
Ransomling is a character from Abobo's Big Adventure. He is a citizen of city.

He is a character from the NES game, River City Ransom.

Like Ransom Gal, you can eat his head and throw his body to enemies in Double Drabobo. He is from River City Ransom. 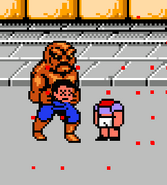