Private Party is a Easter egg in Abobo's Big Adventure. A medal based off the Easter Egg will then be unlocked.

The Private Party appears exclusively in Double Drabobo, by Abobo climbing up the iron ladders nearby the door, using the elevator glitch (originally presented in the original Double Dragon) to enter the private party.

If Abobo enters the party, he sees a room with three Private Party Girls beating up Tanooki Mario, Raccoon Luigi, Princess Toadstool, Toad, and two unnamed men. One of the women approaches Abobo and states that this is a private party, and immediately hits him and kicks him out. Abobo can kill or harm any of the girls or anyone in the room. 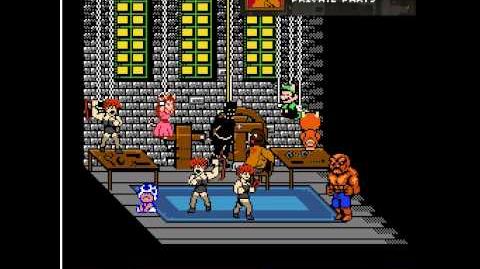