Good
Merchant, also technically known as Mr. Informer, is a character who appears in Zeldabobo.

He originates from The Legend of Zelda for the NES. He has similar clothing to Link's Tunic. He serves the role as a merchant that can sell items. He can be found in either caves or undergrounds.

In Zeldabobo, he tells Abobo that the Old Man hates beef. If Abobo kills him and leaves his room or comes back in, his corpse tells him to "Rot in Hell." A medal known as "Kill the messenger" would also be received to the player. 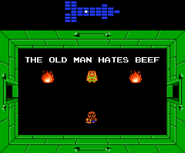 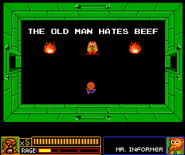