Good
Luigi is a minor character in Abobo's Big Adventure.

Raccoon Luigi (alongside with Princess Toadstool, Tanooki Mario, and Toad) is only seen flying on a chain in the "Private Party" Easter Egg in the first level "Double Drabobo." He seems somewhat relaxed while tortured by three Private Party Girls.

Luigi also makes a cameo being beaten up by Little Mac when Doc Louis tells Abobo about using his skills for evil in a cutscene during Contrabobo. 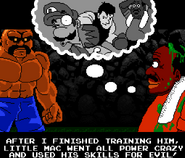