Some unused text is present in the game. Its possible that this text was leftover from earlier prototypes of the game.

Some enemies that appear in the game such as Skeleton Piranha (with two mugshots), Bub's bubble, the three Viruses, and the Spiny Egg that Lakitu throws, all have unused mugshots in the game's files. These mugshots were most likely used for damage for these enemies, but scrapped. It's possible that these mugshots were scrapped obvious reasons. Unused mugshots for the Referee and Cameraman from "Pro Wrabobo" also exist.

In Abobo's Big Adventure, both variations of Skeleton Piranhas are fought against the boss battle between Big Daddy, Bub is an individual enemy, and a pre-existing mugshot for Bubbleman's Bubble exists instead of Bub's. The three Viruses are shown to come out of Cranky's. They also can't be damaged. The Spiny Egg is only thrown out by Lakitu. The Referee and Cameraman are only seen during The Amazon's battle. The health and mugshots for fighting Big Daddy, Lakitu, Cranky and The Amazon are shown onscreen instead.

Some unused enemies are seen in the Abobo's Big Adventure game files as unused mugshots for these enemies are seen below, suggesting that all of these enemies may have been planned to appear in the game as enemies. Over nine unused enemy mugshots appear in the game's files for Abobo's Big Adventure, though none of the enemies sprites are present in the said game's files. 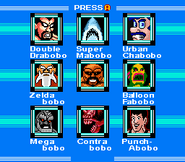 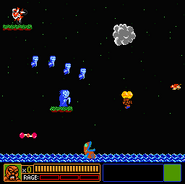 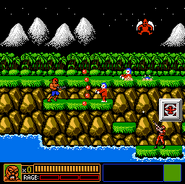 One of Vic Viper's forms was most likely going in an appearance in the game's intro.

In the game's files, Guts Tank from Mega Man 2, a boss based off the Robot Master, Guts Man, can be found. This boss was most likely going to appear in some point in Abobo's Big Adventure. Guts Tank would have most likely been vomited out of Kirby in Contrabobo or not.