Electric Coral is a hazard/obstacle that appears in Abobo's Big Adventure.

Electric Coral are pink and purple coral that only appears a few times in Super Mabobo, which can zap Abobo if he touches any of them, which turn green and blue when zapping him and zapping sound effect is heard. Their are several variations of this coral, as some appear upside down and others appear would appear on the pink coral from Super Mario Bros., which does the same thing by zapping him. Like Blade Traps, the coral is one of the few enemies in the game that doesn't have a mugshot or health-box, since it is a obstacle. 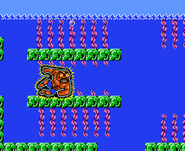 Abobo being zapped by the electric coral.

Abobo as a skeleton when being zapped by the electric coral