Donkey Kong is an enemy and a mid-boss in Abobo's Big Adventure. He has a son named DK Jr.

He is throwing barrels at Abobo. He can be defeated by four-five kicks-punches. 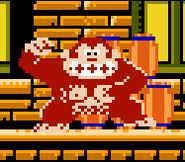