Contrabobo is seventh level in Abobo's Big Adventure. It is a compilation of levels 1, and 3 out of the original "Contra." Everything is as the game was played except for several changes. For example, the weapons got a slight upgrade---

The Flamethrower Gun can now fire more than 3 fireballs at a time, and whilst running, they can be melded together into a wheel of flames.

The Machine Gun....got no upgrade, whatsoever, but it's still a useful weapon.

The Spread Gun receives a similar upgrade to the Flamethrower Gun, but is much more effective.

The Laser Rifle had been replaced by the Lemming Cannon, which fires unsuspecting lemmings toward any foe and momentarily walks around (if the target is hit) before detonating, causing quite a bit of damage.

There is no Rapid Fire upgrade, but it was barely helpful, anyway.

Invincibility has also been taken out for difficulty modification.

The game basically takes place after destroying Abobo's dark robotic copy in Mega Mabobo. After it self destructs from critical damage, the head remains, printing out a map indicating the whereabouts of Aboboy. After reading the sheet of paper, Abobo dons military-esque gear and continuously shoots out of the gun that he holds throughout the entire level, this opening cutscene is a direct reference to Rambo.

There are a few new enemies in part 1 of the level such as very basic Contra enemies, the Zombies from Ghosts 'n Goblins, RoboCop, Jason Voorhees, Rambo, and the boss of part one, Krang and Kirby. The level basically pans out as the exact same as the original game except for fewer power-ups and more enemies. If the player can press the keyboard's buttons, Up, Up, Down, Down, Left, Right, Left, Right, B, and A, which are the buttons for the famous Konami Code, they will unlock Player Two mode, where a second player, based off Lance Bean, will spawn and can be controlled by using the I button, and he fires by using the O button, however, if the player dies at least three times, but presses the buttons for the Konami Code, the player would get over 30 extra lives, just like the original Contra.

The first boss seems to be Krang (enemy of Teenage Mutant Ninja Turtles, perhaps?), who seems to be very easy. His only attacks seem to be walking around and firing his fist from its socket. If he's facing the opposite direction from Abobo, when he fires, he'll turn around instead of walking to the edge of the screen, first. After his defeat, Kirby flies in and takes Krang's controller and enters his body as a replacement. At that point, Krang jumps off-screen and rises as a MUCH larger and much more powerful being. This time, he has new attacks (in the following order):

Basically the same as his first phase, but much larger. He will only attack the top platform.

Kirby inhales a supposed alien from Contra (which can hit the middle and bottom row if you don't duck/jump) and spits it out in a diagonal direction.

Krang, or Krang-By, now has not 1, but 3 weak-points, the arm, the head, and the control panel, where Kirby chose to settle. Each takes a barrage of bullets to destroy, and the boss can only be destroyed if all three are destroyed. After Krang is destroyed (again), Kirby flies out from it at the last second, and makes his way to the top of the waterfall in level 3.

Basically the same as the original, but with some new enemies. Make your way to the top while facing a naked person called Nakey, Zookers, Fly Guy, Ryu Hayabasa, Pit/Kid Icarus, Pterodrop, Stingers and more to fight Kirby once again...only to find the regular boss...but before it can attack, it is instantly pulled under by an unknown force. Shortly after, the ground starts to rise, and out pops a Gigantic Kirby. However, he's weaker than he was with Krang. He has 4 attacks.

Kirby tries to suck up an ability with this. Two ways you can die from this is if Kirby gets you instead or if you get hit by one of the rocks he chose to inhale.

Kirby becomes a random statue (of either the Venus de Milo (left), The Thinker (middle), or Tanooki Mario (right) and drops in high hopes of killing Abobo. Whether he misses or not, he'll turn back, fly back to the background, and drop the ability for a new one.

Kirby spits numerous fireballs that later drop to the battlefield. He only does one wave before dropping the ability.

Kirby spits out a normal sized missile that can't be destroyed to home in on Abobo. If it hits him, Abobo will immediately be frozen and can only be freed by death or pressing left and right very quickly. If not, it will turn into a ball of ice spikes that will melt later on.

After the all 3 abilities had been used, Kirby spits out 3 power-ups for Abobo to use and starts again.

Abobo phases out and reappears in an airplane dropping bombs all over the screen. The bombs either hurt or kill every enemy on screen (or very close to being on screen). This rage move is called "Bombs Away".

After the fight, Kirby will vomit various NES characters most notably Ryan, Air Man, Bubbles, Wart, Trouter, Phanto, a Pokey head, Popo, Samus Aran, and a guitar, Ninten, a Space Bug, a Commander, a Falling Rock, Bubbles, Yoshi, a Snail, Papa, Huey, Dewey, & Louie, E.T., Chip, Simon Belmont, Bomberman, Pac-Man Ghost, a Tetris block, Gezora, Mike Haggar, Ganon, a Blue Dr. Mario Virus, and large amount of NES characters, but surprisingly, no sign of Krang or Gromaides. After he's been completely emptied out, he drops to the ground while something inside of him starts to kick until Kirby eventually explodes, revealing Doc Louis from Punch Out!! Before being bludgeoned by Abobo, Doc stops him and tells him of the whereabouts of Aboboy, who is kidnapped by Little Mac, after a bloodthirsty rampage of punching out people who weren't even opponents. He then offers to train Abobo for the final fight in the entire game: Versus Little Mac. 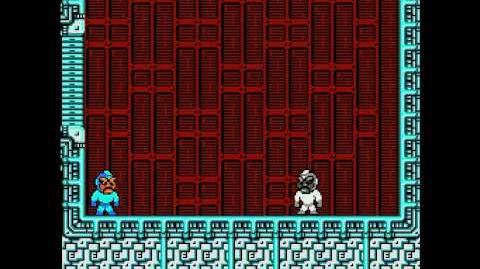 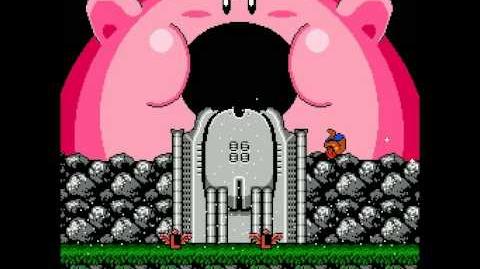