Zeldabobo
Choco Kiss is a semi-common enemies that appear in the stage Zeldabobo.

They originally appeared in original The Legend of Zelda for the NES. They were found only in the dungeon levels, and they were originally called Gel, a slime like creature. They all had different colored forms like green, brown, gray, black or blue. Gels never will never drop any items while they were defeated by Link's sword.

Choco kisses will swarm the green dungeon of Zeldabobo, Abobo can defeat them in one hit, while they can't drop anything, however they can drop hearts to heal Abobo. 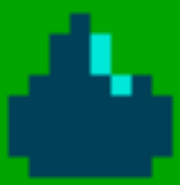