Mega Mabobo
Bub is a enemy that appeared in the Mega Mabobo level.

Bub is a Bubble Dragon as the main protagonist and the main playable character in the arcade and NES game Bubble Bobble. His machine is called a "Sniper Armor" that originates from Mega Man 2 and part of a Sniper Joe enemy called "Returning Sniper Joe."

Bub is very similar to Dino Roller, as both creatures are reptile / dragon like creatures on their own machines. Bub's machine jumps from place to place, if Abobo knocks down it's machine, Bub will fall off of the armor, and he will spit out bubbles out of his mouth, he can be defeated very easily.

Bub also appears in the game's opening sequence flying in a bubble in the air. 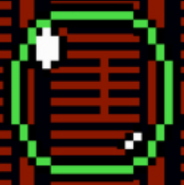 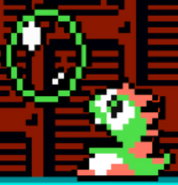 Bub spitting out a bubble