Zeldabobo
Bob-omb is a bomb enemy that appears in the Zeldabobo level.

Like Shy Guys, Bob-ombs originally appear in in the world of Subcon in the NES Game, Super Mario Bros. 2. In Japan, they originally appeared in Yume Kōjō: Doki Doki Panic. They would explode at the player, and then a explosion would have happened. Bob-ombs would later appear in the Mario series as a regular enemy starting with Super Mario Bros. 3.

Bob-ombs appear in the Zeldabobo dungeon in a couple of rooms. The Bob-ombs will explode when Abobo is close to it or hits the bomb, a explosion will occur. A medal called "Idiot" would be unlocked if Abobo managed to touch the Bob-omb, which would explode. 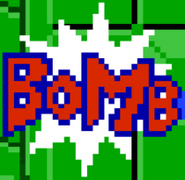