Good
Abobo's Snail Form is a transformation Abobo turns into in Abobo's Big Adventure. The snail's skin is colored brown as Abobo's brown skin color, and his shell is colored blue to represent the color of Abobo's jeans.

In Zeldabobo, Abobo gets transformed into a snail if he gets hit by one of the Old Man's yellow homing projectiles, a ten second time will then appear as Abobo can move as a snail very slowly, once the ten seconds is done he turns back to normal. 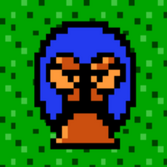