The Abobo's Big Adventure Wiki is the wiki about the flash game Abobo's Big Adventure that anyone can edit. The game can be found and played here. This flash game is a big tribute, and bloody love letter to the Nintendo Entertainment System released in the year 1985. The game's main playable character, and antihero Abobo from the Double Dragon video game series is a playable character in the game traveling through various worlds of the most popular NES games to save his son Aboboy from the kidnapers. The game was originally released on January 11, 2012, on the website "Newgrounds". The game was made by I-Mockery founder Roger Barr, programmed by Pestoforce, with the game's art, and animation was designed by Pox Box.

A Wikipedia article of the game is available on Wikipedia. Here's the link, https://en.m.wikipedia.org/wiki/Abobo%27s_Big_Adventure.

Check out the game's cool Intro.

Check out the game's unique Credits.

Check out the game's cool variety of Enemies. For example, this enemy is Alex from River City Ransom.

Check out the game's really cool variety of Bosses. This image has the Old Man (as his Old Giant form) from The Legend of Zelda as a boss.

Enjoy the variety of the game's levels taken from different NES games. 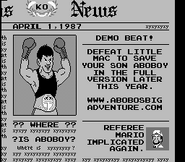 Newspaper from the demo of Abobo's Big Adventure.
Community content is available under CC-BY-SA unless otherwise noted.
Advertisement